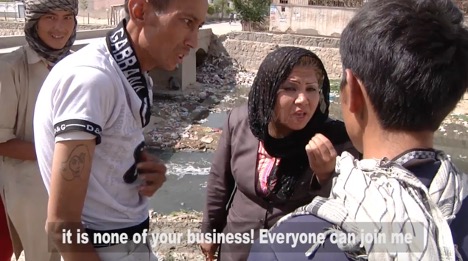 Laila, Haidari is the one among the millions who launches her own camp to recover addicts in 2014 in Afghanistan. She welcomes the addicts to the camp for the treatment program. The addicts are passing 25 days for a recovery program in the Mother Camp.

Haidari said that she has funded “Taj-Bigum” to supports the Mother Camp with her own income and starts up working as an anti-drug activist in Kabul. She believes that it is just a humanitarian act within a lot of challenges to help her society and to survive the young generation as much as she could.

Afghan addicted man “Naqib” is the character in the documentary who is going to join the Haidari drug treatment program for recovery. I am going for drug treatment to be recovered in the camp with miss Haidari, Naqib said.

Naqib added; I want miss Haidari to talk with my in-laws to bring my wife and children back home because my in-laws do not trust me as an addicted person and no one believes in addicted person words or demands. When I recovered, I am going to help my family again as before.

Naqib joining the treatment program for 25 days by Mother Camp in Kabul.

Laila, Haidari founder of the Mother Camp says; These people hopping for me, I have faced a lot of challenges in my life. I am believing in myself that God will help me one day but unknow when. Till now the God has helped me. I could not support all these people just by loneliness in such situations ongoing in Afghanistan. I am a woman, being a woman is a problem in Afghanistan.

I am feeling happy right now, and my message to my friends and all drug addicts is to treat themselves. I am feeling that I reborn, I am very thankful to Laila Haidari who struggled to help me, Naqib said.

Naqib added; When I was using drugs, I didn’t attend my family now I know what’s the meaning of life and family. Now I’m going to call my mother and she will be so excited to hear me. She used to say take care of yourself. You will understand the meaning of parents when you have married and got a child. As much as family suffers, I am suffering too, it makes me sad. I dreamed of my children last night who are asking for gifts. My son is asking me for shows and my daughter who speaks newly asking bungles.

Haidari has been survived hundreds of young lives who have used drugs in Kabul. Some of the recovered addicts are still working in a hotel “Taj-Bigum” founded by Laila. The personnel in Taj-Bigom restaurant are those addicts who were recovered in the Mother Camp years ago.